In the early 1800’s the luddites set out in a rampage to destroy the wool and cotton mills.

New machines, new ways of thinking, new social customs have regularity occurred to upset the normal way of things. There are many instances where new inventions and fads have led to a major upheaval in the ways of life, sometimes many times in a one generation.

I shake my head at the realization that hundreds. perhaps tens of thousands of individuals are merging and clashing this very day all over the world demanding that their lives stay the same - or move along with the change of time.

I wondered if this is the same thing? Luddites smashing the machines?

It is too much for me to comprehend any solution, so I put on my hat and jacket and escape outside for a stroll around the block.

At least this small act feels likes some kind of progress.

Recently I remembered a conversation from quite a while ago. I had been flown into the states to help a company organize and learn how to use various computer applications, as well how to collect the and organize the files for print.

In appreciation,the supervisor, a nice middle aged mother invited me to dinner, with her husband and their daughter.

Her daughter, Katy, if I remember rightly, had become good friends with another girl in her class. They had since had a few sleep overs at each others homes. Her friends parents were regular church goers and Katy had been invited to go to Sunday school. It was okay with Katy's mom, but she laughed saying to me it had resulted in a lot of questions.

This is their conversation that bubbled up to the surface from many years ago.

"Mom, do you think Mary and Joseph had a cat so that Jesus could have a pet?"

"Why on earth would you think that? Or should I say Why in Heavens name? "

"Well they lived in a manger with cows and sheep and straw. There’s bound to have been a cat to keep away the mice! "

" I suppose that’s quite possible."

"Okay the mom, what do you think the cats name would be? Would Angel be a good name?"

Caught with surprise at the time she recalled, that she had laughed to herself wondering where does this all come from and nodded her head up and down at the child. " A wonderful name"

Katy continued:
"If Jesus was really God's son, you know, the son of God, then why was Joseph there?
And you think maybe because God was working so much and couldn’t be there all the time, he asked Joseph to help take care of everyone? And then God gave Jesus a cat for a pet?"

"Whoa, I think It's time we went to get groceries" she said  overwhelmed  a bit with the discussion and somewhat thankful to change the topic.

"Mom could I have a cat I could call Angel?  taking her mother's hand as they left their house to  drive off to the grocery store.

She laughed retelling the story as she realized at the time that Katy was angling for a kitten herself.

Kids! Aren't they a wonder!

The Friend I Never Had 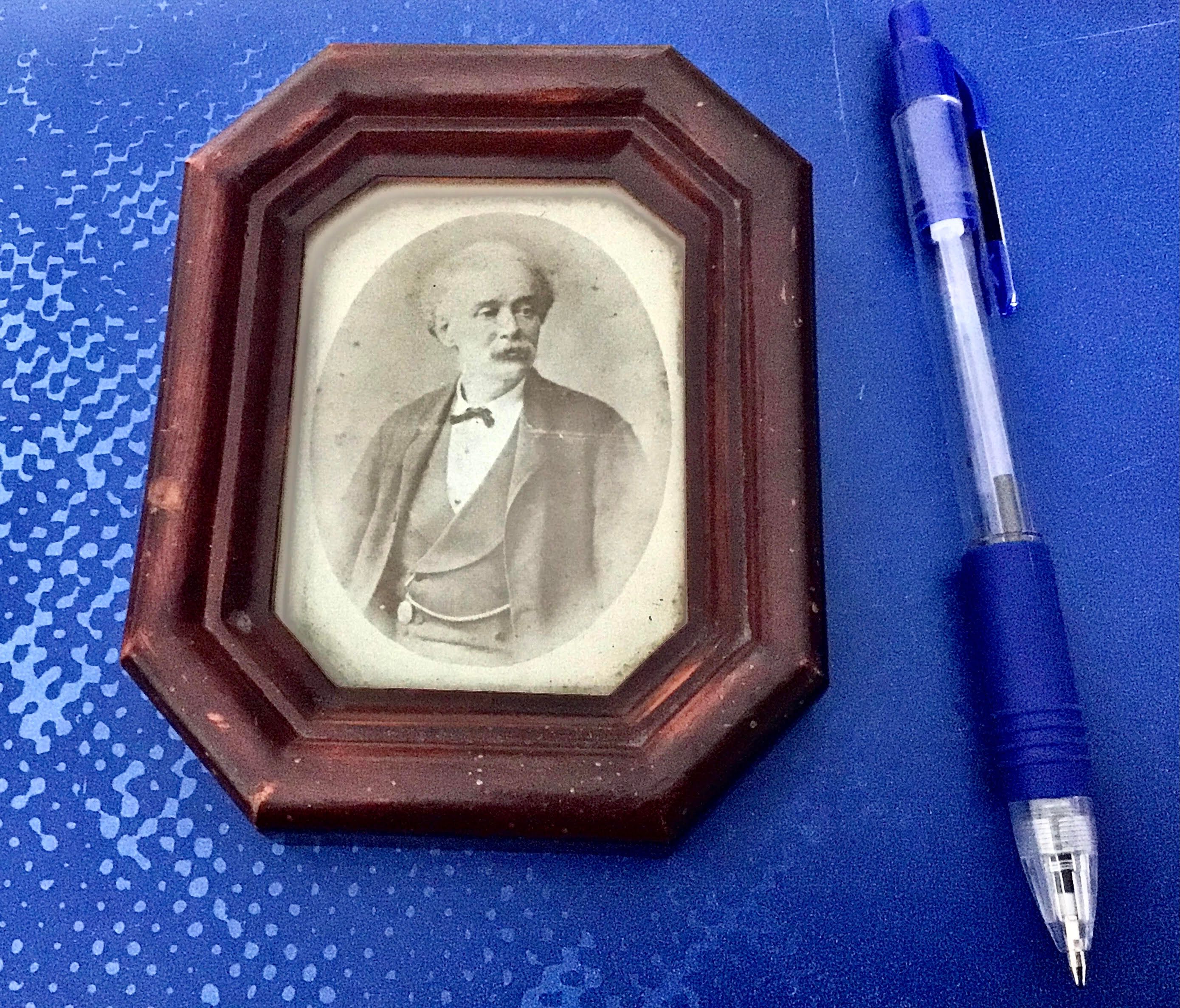 I found this nice little picture frame for 10 cents at a garage sale. (this was before the Damn Panic) I often have small sketches that I use to work out pieces and parts of a painting I‘m developing and thought this frame might hold one of the better ones nicely.

The man, according to an inscription on the back of the frame is a Mr. Theodore Arsenault, born 1853. I asked the lady at the garage sale if he was a relation to her, but she said no and had no idea who he was, or how the picture had come into their possession.

I’ve had this little picture frame sitting on a shelf, where I have picked it up and made ready to dismantle the picture and then slip in one of my sketches. But I haven’t yet! I would look at the image and wonder is this the very last remaining evidence of Mr Theodore Arsenault, who I was about to remove and throw into the garbage.
So it returned to the shelf to wait until then next time. I didn’t have the heart to dispose the last evidence of Mr. Theodore Arsenault.

“Look at this way” - I pondered, “what if it was me in this little frame and someone a hundred years from now picks it up, and decides to use it for a baby picture.” My image, my last existence from the past, soon to follow the endless dissolution, the disappearing humanities, the generations of forgotten individuals. Poof! No more! Forgotten !

Today he again sits on the shelf, unaware of my contemplations and unknowingly has become “the Friend I Never Had.”

Why Now? If you take the time to browse the pages here, you’ll see a fair amount of content. Over the years I have collected, produced, and shared in a lot of different creative venues. I wanted this all in one spot, thus OgilvieOriginals.com!
The process to building a website, particularly this one with 3 main branches (at the moment) seemed overwhelming. But if I live to be 100  (which is what my wife, Kim is insisting I will do), then I figured, I have lots of time.

I used Bandzoogle, a web design company for musicians. I expanded my site to do more than music and because of that, it took me a while to learn all of the things possible and how to use them the way I wanted them to be used. I cannot stress how good the Help support has been. If you are interested follow this link https://bandzoogle.com/?memref=r83e31
You have a 30 days Free to test it out. Totally amazing! (By the way this post about bandzoogle  is on my own, no obligation to them. I really am quite pleased.

A bit about my Music. Read my bio if you want to more info. After being a musician for so many years, the urge does not fade away. The compositions posted here are my connections and experiences from being with different bands and individuals, a melting pot of styles and my own inner need to create.
Certainly not pop music found on the radio.
The process to release my album “the Planeteers, Moving though Space and Time” certainly wasn’t with great expectations of fame and riches.
(Hey, you can get everything here for free so go on download, BUT turn it up! You’ll miss a lot if you don’t)
I chose Disco Kid to manage and distribute the music. Wow, Look where they have posted my album!
"The Planeteers, Moving through Space and Time" has been submitted to Amazon, Anghami, Apple Music, MediaNet, Deezer, Instagram/Facebook, YouTube Music, iHeartRadio, ClaroMusica, iTunes, KKBox, NetEase (beta), Pandora, Saavn, Spotify, Tencent (beta), Tidal, TikTok/Resso, Triller (beta), and Soundtrack by Twitch!

Of course this all goes nowhere without generous amounts of time to maintaining social media outlets as listed above. Far too much time for me, I’ll do some, but man I got things to do still!
If you would be kind to share, maybe post something, then over the next almost 30 years I might have a few followers. Thanks for checking in. More to follow next week!

There are a lot of new pages and items here on this site. In future I'll use this blog to notify you of the latest additions, while also giving more in depth background about their creation. Please sign up for notifications, I promise only once a week (perhaps 2 at times) to fire off a notice to you.